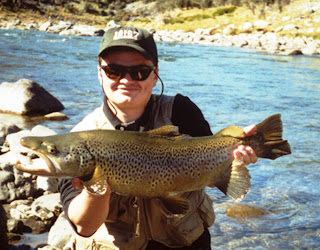 While many anglers are quite content to fish the same fly patterns on the same river year after year, some fly fishers are constantly pushing new boundaries. They are exploring new waters, experimenting with new techniques, striving to get a better understanding of the insects that call their local stream home. The inquisitiveness the pastime can arouse is one of its great attractions. Indeed, some anglers I know would say that the day they stop learning new things on the water is the day they’ll cease fly fishing.

A good angler is always ready to expand his or her horizons. Doing so can sometimes lead to immediate gratification, as ’s Chappie Champan explains.

“I once had a client named Stewart Merrill, an attorney from ,” Chappie began. “He came down to the to fish with me for a few days. Stew is a good fisherman and he did pretty well, though we didn’t get any extraordinary trout. Before the last day that we had to fish together, Stew said, ‘Chappie, I want a chance to catch a trophy trout.’ I told him that to get a trophy fish, our best bet would be to take a helicopter trip into one of the lesser-trafficked streams I know that holds large trout. He was alright with that, so we booked a ‘copter and the next morning we flew off after breakfast. In , the fishing doesn’t really start until after 9 am. The water is too cold before for much insect life to be stirring about, and the sun is not high enough to get your polarized glasses to work properly. We fish ‘banker’s hours,’ very civilized. And very appropriate when you’re going after brown trout, the great gentleman of the river.

“The helicopter set us down near a spot I like called the Rock Pool on this particular river, and he took off, planning to pick us up around 5:30. The river I chose that day flows gin clear, and is very isolated, though just a short flight from town. It’s always very special to be there. I have a routine when I’m guiding. At the start of each day, I rig the client’s gear, and set them down on a piece of water where I’m reasonably sure there aren’t any fish, so they can get into a rhythm of casting. It’s the same routine for seasoned anglers and beginners alike. On this day, the routine was no different. After getting Stew set up, I had him start making some casts while I searched the river for signs of any insects hatching. There still wasn’t enough light to really scan the pool for fish. As my eyes were wandering over the water, I did a double-take. In front of a large rock on the other side of the pool, I saw a nose break the surface. I thought that perhaps it was just a single rise, but the nose came up again, and it was evident that it was a large fish. I said, ‘Stew, there’s a fish over there.’ ‘That’s going to be a hard cast,’ Stew observed, and he was spot on. He would have to negate the irregular current flow created by a large rock across the river. The presentation was further exacerbated by a rock that rested between us and the fish. There was no place where we could cross the river and effectively cast upstream to the fish; the only way he might be able to get the proper drift would be with a right hand reach mend, plus another mend on top of that. I suggested this, and he said, ‘I don’t know the right hand reach mend.’ So I led him downstream to show him.

“As I mentioned before, Stew is an excellent angler. Despite this, he had no compunctions about admitting he didn’t know something, and was quite willing to learn a new technique. This is a quality I’ve seen again and again in anglers who visit . They come here at least in part to learn. If you come with an open mind, you’re going to learn more than you ever thought possible about trout fishing. The people who think they know it all don’t catch many fish in .

“We walked 100 yards or so downstream and rehearsed the cast a few times. It didn’t take long for Stew to get the hang of it. Then we returned to the Rock Pool. I tied on a small black caddis pattern, and Stew began. It was a reasonably long cast—50 to 55 feet—that he had to make, plus the series of mends. It took quite a while to get it just right. Much to Stew’s credit, he didn’t spook the fish, despite the many attempts he made. After 45 minutes, he got the right cast and the right mend in there. I saw the nose come up and and whispered ‘Go Stewie!’ The fish was on. Coming from , Stew is quite comfortable playing big fish. After 20 minutes, he gave me a shot with the net, and I came up with a gigantic brown—10.5 pounds. Stew was excited to say the least. After we released the fish, he said ‘I don’t want to fish any more.’ I reminded him that it was just 10 o’clock, and that the ‘copter wasn’t coming back for seven hours. I gave him a snack, and he suggested that I fish. I said, ‘It’s your day. You fish.’ He finally consented. We stood up. As I was swinging my pack on to my shoulder, I looked out at the rock. Right there in the same spot, I saw another nose. It was a different fish, but would demand the same cast. I said, ‘Stew, you can make that cast. Have another go.’

“Stew stripped some line off, made a few false casts, and dropped it in there perfectly. As the fly drifted down, the nose came up and I said ‘Go, Stewie!’ The line came up tight on the fish, and we were off again. I couldn’t help but saying ‘Oh God, Stewie, that’s a big fish!’ ‘Bigger than the other one?’ he asked. ‘Can’t tell until we get him to the net.’ Soon enough, Stewie did just that. This fish—another mammoth brown—was 11.5 pounds.

“In my twenty years of guiding, I’ve had a number of occasions when I’ve had clients catch double digit fish. I’ve had a few occasions where an angler has caught two such fish in a day. But I’d never had a client catch two 10 pound plus fish on two consecutive casts. After landing the second brown, Stewie was silent. He walked 30 or 40 yards away from me, and just looked at the river. He understood that what he’d done was something very special. And he wanted to savor it.”